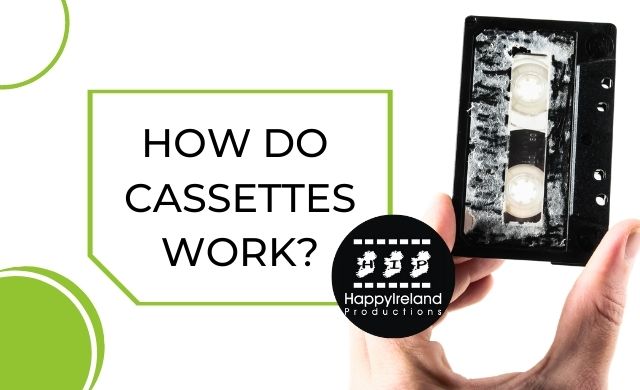 Small and compact but when inserted into a player delivered hi-fi tunes and music. But how did they work? Short answer – magnets.

More specifically, the process of Magnetic Recording. Which involves storing information electronically. It is present in broadcasting equipment and analogue systems such as VCR players.

There two segments in a cassette tape:

The tape is coated in magnetic particles- an oxide powder. This oxide is mixed with a binder, within a dust-free environment to attach it to the plastic film. The most important characteristic of this compound is that it is ferromagnetic.

Ferromagnetic material when exposed to a magnetic field is configured to match that field. In a recorder, the tape is passed along several magnetic heads. As the magnetic particles of the tape interact with the magnetic head, they are aligned to that corresponding field- matching the pattern of incoming sounds.

This process allows two things, the ability to:

These two features contribute to the popularity of the cassette tape. Ease of use, configuration and to instantly record sounds.

Not all cassettes are the same

When we insert a cassette tape into the player, the electromagnetic head of the cassette moves from the sound waves recorded on the tape. This movement translates into electromagnetic waves which are then sent into speakers.

Since their official introduction by Philips in the 1960s, there have been several improvements and some are in use today:

The first and cheapest type of cassette tape. This format has been continuously improved on to include more evenly distributed magnetic particles.

This innovation uses chrome within the tape, the ferric-oxide particles combine with the chromium dioxide and give the tape defined high frequencies, reduced noise i.e. a quieter background and becomes more receptive to details.

The only type of tape that uses metal particles instead of oxides. The innovation provides the highest sound quality out of the other tapes.

This makes it the most popular format for recording studios, artists and musical performances.

The cassette tape utilised the most advanced process at the time. Although considered by many now as an obsolete format, it still has an outstanding presence in today’s digitally inclined world.

The BBC credits their upcoming return with recent album releases by music artists- Lady Gaga, 5 Seconds of Summer and Yungblud.

over 65,000 cassettes were purchased by the music-buying public in the first six months of 2020. That’s a staggering 103% increase in cassette sales compared to the same period last year, while those 65,000 sales have already eclipsed the total amount of cassettes that were sold in 2018.

But over digital mediums, why are cassettes still in use? A largely-niche industry still revolves around this music format. Is it because of their physical value, collectability or association with nostalgia?

Who knows, at least you know how it works!

Thank you for the visit! We're letting you know we use Cookies

Any cookies that may not be particularly necessary for the website to function and is used specifically to collect user personal data via analytics, ads, other embedded contents are termed as non-necessary cookies. It is mandatory to procure user consent prior to running these cookies on your website.