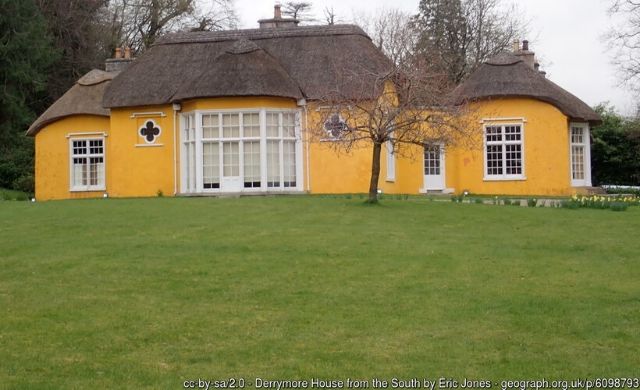 Two miles N.W. of Newry on the Newtownhamilton Road in County Armagh stands historic thatched Deramore House. It has encased within its time-worn walls and beneath its quaint thatched roof, many historical associations with a now dim and fading past.  This quaint, elegant 18th century thatched cottage was built of granite in 1776, although this is discovered only when the warm amber plaster has been chipped away and it is the sole survivor of the small thatched mansion houses, which were once in vogue with lesser Irish gentry.

Shaped like an E, with a first impression you would be looking at three rather Irish elaborate thatched cottages linked together.

Deramore means ‘Great Oak’, these lands were probably at one time part of the primaeval forest.  It seems for centuries there has been a house at Deramore, for there are records that a Henry McShane O’Neill was living here very early in the 17th century as life tenant of the lands of Camlough.

The plan of the present house, built by Sir Isaac Corry soon after he became M.P. for Newry [he retained his seat for 25 years in the Irish Parliament], is laid out in the form of an oblong enclosing a courtyard.  The imposing entrance, complete pillared portico leads to the entrance hall with its quaint Georgian doorway and flat roof between the two thatched wings is unique.

The apartments are laid out with taste and its cellars once brimming with wine, recalls the heyday of the titled gentry.    The drawing room with its Adams ceiling and French bay window is connected to the wings by two circular anti-rooms, and in the treaty room decorated with 18th-century furnishings,   it was here in its shady light in 1799, Isaac Corry, a great upholder of the Union and Lord Castlereagh [Chief Government spokesman] drafted the Act of Union between Great Britain and Ireland. The Bill, which later passed into law and came into operation on the 1st of January 1804.  On this same decorative table, King George V signed the Treaty of Partition in 1921.

Isaac Corry, the owner of Deramore House was born in Market Street, Newry on the 15th May 1752. He was the son of Edward Corry, whom he succeeded in representing his native borough in the old Irish Parliament in 1776.  He had studied law in Trinity College and had been called to the Bar, but a Parliamentary career that promised speedier advancement was more to his liking.

His eloquence in Parliament soon distinguished himself as a member of the Whig Opposition and in 1789 he was awarded the post, Chancellor of the Exchequer – the last to hold this coveted position.  As Chancellor, he imposed the hated ‘window tax’.

Though the Irish Government in which Corry had found office will always’ be remembered as Grattan’s Parliament, hopelessly corrupt and badly in need of reform.  75% of the country was not represented, and of its 300 members, the county constituencies returned only 64.  The rest represented nobody but the scheming Landlords who sat snugly in their ‘pocket boroughs ‘ as they were called.  These ‘Borough seats’ were traded shamelessly and openly, commonly sold for £2,000 a parliament.   This was one of the factors leading to the growth of ascendancy, corruption and wealth in Ireland during this period.

But in these closing decades of the 18th century, the fear of an invasion stalked the land.  Two events had occurred that had shaken the world. The growing and spreading tide of democracy preached first in Europe from the guillotine of Paris, followed by the American War of Independence when the New World colony shook free its chains from England.  These two events gave hope to Ireland through Henry Grattan and Theobald Wolfe Tone, two sons of the old country, equal in patriotism, though at opposite in intention and method.

The Ascendancy was alarmed for its privileges and got prepared for the great betrayal.  Only by annexing the legislative entirely to England’s could their ‘privileged life’ be guarded and nothing must be allowed to stand in the way.

As regards compensation, a million and a half of the people’s money was divided amongst the ‘pockety borough’ members of Parliament.  Then followed sales of peerages, martial law with all its sadistic horrors and excesses – in short, the most avowed bribery in order to ensure the bill’s passage.

On January 15th 1800, the Irish Parliament in Dublin was debating the momentous Act of Union between Great Britain and Ireland.  The session continued throughout the night. At seven o’clock in the morning, Henry Grattan, almost too weary to stand on his feet, spoke against the proposal. Isac Corry made his case with equal strength in favour.

He accused Grattan of being largely responsible for the ’98 rebellion; Grattan’s reply was so incisive that Corry challenged him to a duel.  The duel took place one Grey morning in Ballsbridge, when the first and only shots were fired and when the smoke cleared; Corry was wounded slightly in the arm.  Honor was satisfied.   The duel, unimportant as it was, had an effect on the subsequent voting.  The proposal ‘ that a legislative between two kingdoms was Desirable,’ was passed by a majority of 46 some days later.

Following the passing of the Act of Union, strangely enough, Isaac Corry faded from the political limelight.  He was twice defeated in Parliamentary contests for a new joint assembly, he had helped to create; for there were those who remembered his activities as a captain of the Yeomanry and had taken revenge.    He was very unpopular during the ’98 rebellion, he was responsible for the imprisonment of many prominent Newry Presbyterian citizens who might have been sympathetic but did not take part in any way in the rebellion.   His carriage was pelted with stones every time he had to pass through town on his journeys to and from Dublin.

But Corry was wily and hadn’t been Chancellor for anything.    He had a special road cut through from the main Dublin road to his house so as to avoid the hills into Newry and by-passed the town and levied the cost on the people.   To this day the road that he used from his Deramore home to a safe mile south of Newry is still called ‘The Chancellor’s Road’.

Forty years ago when I first visited Deramore, the furnishings in the Treaty room included a beautiful shamrock-shaped table on a harp-shaped pedestal, it is said the Act of Union was drafted on this unique table.  On this same decorative table, King George V signed the constitution of Northern Ireland in the City Hall, Belfast in 1921.  On a recent visit, the caretaker there for many tears, Mr Edmond Ballie informed me the table was somewhere in England for safekeeping.

Deramore House, a National Trust property, stands today as a silent witness of these eventful times and the subsequent days of oppression, depression and political upheaval and we should be thankful that it is preserved today as a national exhibit of an epoch passed into the quiet repose of history.

About the middle of the 19th century, Deramore passed into the hands of James Richardson, a member of the Society of Friends and the family who had built the model worker’s village.’ round a huge flax linen mill at nearby BESSBROOK.

It was built, between the years 1846-55 by Quaker linen manufacturer John Grubb Richardson. The town owes its existence to the ‘weaving of Irish Linen’ industry and is particularly well laid out. Nearby local granite quarries produced an excellent quality of bluestone, used for the construction of the factory and the solidly built employee’s houses with slate roofs. The quarries also provided the stone for Manchester Townhall and other notable English public buildings.    John Grubb Richardson was a patriarchal figure a man of very strict temperance qualities and insisted on a strong commitment to ‘the three P’s’ – no public house, no pawn shops and no police station.

The family motto spoke for itself;

‘ in essentials , Unity,  in non-essentials,  Liberty ; in all things , Charity,’

He had built his model village around his large linen mill here to demonstrate his theory that when strong drink is absent there is no need for the police force, pawnbroker, moneylender or publican.

Bessbrook Spinning  Mill once provided almost all of the area’s employment and at one stage around 3,000 people worked in it.  Its linen was regarded as some of the best in the world.

When the village was completed it could boast of a large community centre, library, lecture hall, billiard room, one of the first saving bank and a fine dispensary where workers were entitled to receive treatment by the firm’s doctor.

The Richardson family were loved by one and all, they made handsome contributions towards the building of schools and their upkeep,  they provided excellent houses for their workers and also supported a village orphanage and a convalescent home in Warrenpoint. You could say they provided all the amenities for full community life.

Mr Richardson’s social experiment captured the imagination of the town and village planners everywhere.   For his ingenuity Mr Gladstone, the Prime Minister offered him a baronetcy but he declined the honour.   Another prominent Quaker, the Philanthropist Mr George Cadbury was born on the 19th of September in 1839. He was a great Liberal and a pioneer of industrial welfare and he was, of course, the head of the world-famous chocolate and cocoa company that bears his name.

He was intrigued by this ‘model village’ and it was the Bessbrook experiment that inspired him to build the township of Bourneville near Birmingham; a project that is said to have influenced village planning all over the world.