Most of the former prosperity of this pretty little village came from the limestone quarries overlooking the harbour, whence limestone was shipped to Cumberland and Scotland.

The export trade is long since gone and now Carnlough with its Victorian atmosphere, the old coach inn of the Londonderry Arms and its colourful atmosphere is well worth a visit.

The village is built around what has been described as an almost ‘Italian bay’ fringed with golden sands. The prominent limestone bridge was built by the Marquis of Londonderry in 1854 to carry the limestone blocks from the quarry face at the back of the tow, to the harbour.

Behind the village is Glencloy, the second of the nine glens, with its forgotten and hidden waterfalls like the Doonan Falls, the Drumnasole falls and the beautiful and secluded Cranny Falls.

There are safe beaches at Carnlough and Ringfad.   The latter was the scene of a shipwreck in 1827 when a large privateer was driven ashore in a blizzard, most of the crew being lost and the valuable cargo falling into the hands of those who came to render help, and ended in helping themselves to the rich flotsam and Jetsam.   Since then many people have tried to recover some of the treasure she carried, but as the famous Tobermory treasure ship across in Scotland, little has yet been seen of it.

I was told at turn of the century, a local man named Hunter was cutting dulse from a rowing boat off Ringfad.  A hook on the end of a long pole was used for this purpose. And when hauling up what he thought was a hook full of dulse Hunter was surprised to see a large leather bag hanging along with the seaweed.  He drew the hook cautiously close to the boat and was reaching out to grab it when suddenly the bag burst open and he saw its contents, hundreds of coins, slipping with maddening slowness back to the depths!

Some Notable Points of Interest

The Madman’s Window, a crevice where the limestone rock forms a natural arch overlooking the sea.  It got its name from a maniac who more than 150 years ago, from this spot hurled himself into eternity.

On the road to Waterfoot, a sign points to St.McNissis’s  College.  This was once Garron Tower, a mansion built during the famine years 1846-48 by Francis Ann Vaire, Marchioness of Londonderry. 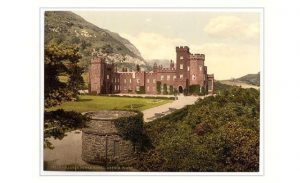 Lady Londonderry started this as a relief scheme, as she rightly believed that the local people would prefer to work to so-called charity.  The pay was a shilling a day for tradesmen and 10p for labourers, and she supplemented this by allocations of the meal according to the size of the worker’s family.  The result was the construction of one of the show places of the Antrim Coast, now presently a hotel.  Nowadays it is a stately and beautiful building, greatly enlarged from the original size, but retaining its graceful lines.

Antrim had at one time a ’rosary chain’ of Franciscan monasteries stretching from Larne to Ballycastle., including those at Glenarm, Layde and Ardlinis. The scant remains (only four crumbling walls and a little graveyard) can be found at the south side of Glengariff.

Local tradition tells us of a large stone once sited here, which had the property of being able to refresh any weary traveller who sat for a short time upon it. There is a story that the Abbot of Layde Friary went to visit the Abbot of Ardclinis community and mentioned that his friars were feeling the pinch because their crops were slow in ripening. At this, the Ardclinis holy man said to his fellow Abbot.

‘When you return to your friary, your crops will be ready for harvesting’

And so it was and the field where the miracle of the harvest occurred was afterwards known as ‘Moneyvart’.

The Queen of the Glens’ is regarded by many people as the most beautiful glen of the nine.  Glengariff Forest Park covers over 1,000 hectares, including the unique 3 mile Waterfall Walkway.

The magnificent waterfalls with magical names like ‘Ess-na-Larach’, Ess-na-Crub’ and others, of which all but one ‘The tears of the Mountain’ refer to a mare –‘The Fall of the Mare’, ’The Mare’s Tale’ and so on.

Thank you for the visit! We're letting you know we use Cookies

Any cookies that may not be particularly necessary for the website to function and is used specifically to collect user personal data via analytics, ads, other embedded contents are termed as non-necessary cookies. It is mandatory to procure user consent prior to running these cookies on your website.