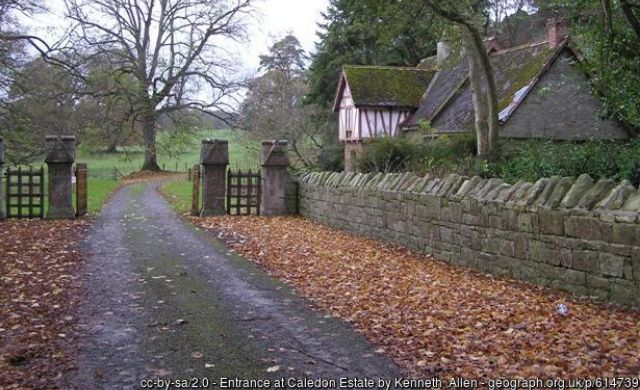 The estate of Caledon or Kinnard, as it was once called has changed hands several times over the last 350 years.   Once the 17th century headquarters for Sir. Phelim O’Neill’s campaign against the English, it passed to the Earls of Orrery, from whom it was purchased in 1772 by James Alexander, son of an Alderman of Derry.

Caledon takes its name from the Earls of Caledon and just inside the demesne is a fine Celtic cross which originally belonged to an ancient foundation at Tynan.

The small but charming gate-lodge near the entrance dates from 1815 and was probably designed by the renowned John Nash who designed the great house in 1808 and 1810.

Standing on the hill is ‘The House.’ as Caledon House is affectionately known. On the lawn, peacocks nod their heads up and down and proudly strut by while, close by, pheasants are being reared for shooting.  When one sees this fine mansion for the first time, one can easily imagine what the old empire was like in its heyday.

James Alexander, who made an immense fortune with the East India Co, at the age of 42 he purchased the Caledon estate for £96,000 from the extravagant son of the 7th Earl of Cork and Orrery. He married Ann, the daughter of James Crawford of Crawfordsburn.

Wanting a house in keeping with his wealth and position, he commissioned, the famous architect, Thomas Cooley [whose work today so magnificently adorns Dublin and also designed the old Poorhouse in Clifton Street, Belfast] designed this noble structure in Georgian style towards the end of the 18th Century.

Caledon House follows the fashion of its era when even country builders knew enough of the order and details of antiquity to be able to reproduce a miniature Pantheon.  The interior of the building is in the true Adam’s style, with every detail being in perfect unity even the doors and mantels in the oval-shaped drawing room are curved.

James Alexander and his young bride were, however, destined never to reside together in this classical mansion for Ann died, before the house was completed, leaving an infant son.  After her death, her husband devoted himself to his parliamentary duties and as a reward for his zeal in public office, he was appointed a Viscount in 1797 and three years he became an Earl.

The second Earl, who inherited the estate in 1802, became the first Governor of the new colony of the Cape of Good Hope in 1806. The classicism of the Georgian period was nearing its zenith, and in 1812 the ‘Governor’  commissioned the great John Nash, the prince architect of the regency, to remodel the house in the best style of the time. He added the two doomed wings, joined by a colonnade of Ionic columns to form a long veranda.

Further additions including a third storey were added in 1835 and the fine library with a low dome, and the beautiful octagonal hall and the entrance portico not added until 1835 form the main features. The superb oval drawing room, redecorated by Nash, with its friezes of classic figures, is perhaps the finest Regency drawing-room in any Irish house, and then there is the boudoir with its wonderful apple green Chinese wallpaper rich in painted birds, great four-poster beds with furniture so delicate you are afraid to touch, all combined to make Caledon one of the most beautiful houses in Ireland.

In this house was born Field Marshall Viscount Alexander of Tunis [the 3rd son of the 4th Earl], greatest of the many excellent Ulster generals of World War 1, who included Alanbrooke and Viscount Montgomery of Alamein.

On these green acres, he spent his youth as she put it ‘the butterfly-net stage of my life’.    Here the future Field Marshall acquired his first lessons in juvenile warfare, pelting his boyhood companions with potatoes and other missiles.  He excelled in Red Indian tactics as informed by his biographer.

This famous soldier and strategist educated in Harrow, commenced his military adventure at Sandhurst He was commissioned in ‘The Micks’ or Irish Guards, at the early age of 20. At 25 he was commanding a battalion in the First World War and was wounded three times and was awarded a DSV and Military cross. After the war, he served with the army abroad and by 1937 he was a Major General at the age of 45.

In 1943 during the 2nd World War, his name was a household word after what can only be described as his ‘battle’, The battle of Tunis.

In 1944 he became the youngest of the Field Marshals.  He was commander of the Allied forces in Italy and Military Governor of Sicily. There were few greater generals in British history than this brilliant leader and military tactician who emerged from the adversity of Dunkirk and Burma to ultimate victory.  He was an aristocrat to his fingertips, and in an age when the virtues of the aristocratic tradition are being quickly forgotten, it is worthwhile remembering that this man, who was courageous and a soldiers’ general and was able to maintain a rapport with men of every rank.

After the war, he was enrolled as a Knight of the Garter and a Privy Councilor. In 1946 he was appointed Viscount Alexander of Tunis and in 1947 he became Governor-General of Canada.

In 1952 he was made an earl and was made Minister of Defense in Churchill’s Government. We in Ulster have produced our fair share of the distinguished sons, but the historians say with good reason that Alexander of Tunis was our greatest soldier.

There is still much to wonder and look at in the grounds with its 300 herds of deer of the red-spotted and fallow species, the second largest deer herd in Ulster next to Glenveagh in County Donegal. There have been red deer here since 1868 when the beginnings of a herd were imported from Scotland, and before that, there was a herd of fallow deer and a herd of bison which the 3rd Earl of Caledon brought back from a Canadian hunting trip in 1642. The last head of the herd hangs in the basement of the big house.

Here in Caledon beauty and history walk hand in hand with the splendid gate lodges and gate piers with sharp sphinxes, intricate urns and a most unusual white iron suspension bridge over the quiet river.

A real curiosity in the Caledon estate is ‘The Bone House’ a 250-year-old ivory palace made entirely of bones, situated on a delightful curve on the restful Blackwater.  The front of the house consists of five large piers consisting entirely of bones, laid one on top of another horizontally with the length pointing inwards and the knuckles on the outside all held together by a lime mortar which is completely hidden.

It has been estimated that more than 10,000 bones were used in this odd bizarre macabre structure, which appears to have been erected to serve as a summer house and it was created by John Boyle, 5th Earl Orrery, a friend of Jonathan Swift and Alexander Pope.

The bones were all femur-type oxen knucklebones or deer bones and closer inspection will reveal that they have been carefully fitted together and held in place with cement.   Considerable skill and technical expertise, not to mention the patience of the builder, went into the construction of this exotic whim of a titled landlord and the effect is surely overpowering.

Fantastic stories were told about this folly [which apparently, in olden days, was a popular sport of the idle rich and erected purely for ornament] the wildest being that it was built of human bones of the English army slaughtered by Owen Roe O’Neill’s victorious troops at Benburb.   Some even went so far as to say that the bones were human ones, but to find the truth, we must look at the Orrery Papers dated June 24th 1747.

“We came to a resolution of building a bonery, to strike the Caledonians with wonder and amazement by fixing an Ivory Palace before their view.  We have already gathered a great number of bones and our friends the butchers and tanners of Tyrone have promised to increase the numbers”

Whether the Caledonians were suitably impressed, is not recorded, but I certainly was.