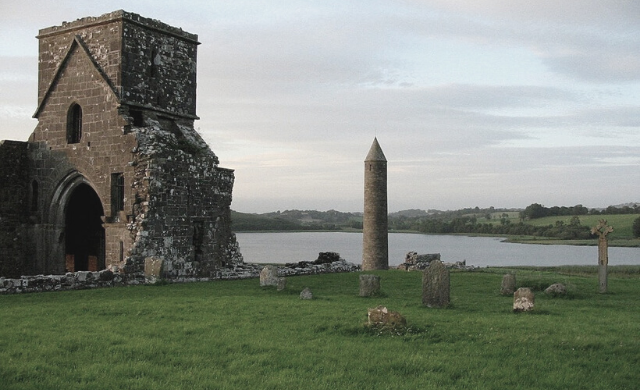 Devenish island has always been revered by the people of the district.

Our little lake journey begins at Carry Bridge, in the island town of Enniskillen. We pass the very picturesque Water Gate, with its two tall turrets standing mirrored over the peaceful waters of the River Erne. The water Gate is part of Enniskillen Castle which contains the barracks and a three-story keep, all that is left of the ancient Maguire’s castle.  The latter was first mentioned in the Annals of Ulster in 1439, the year the great Maguire chieftain was a prisoner in his own home. Our boat now glides under the west Bridge with its nests of house martins, each with its flightless parasite flies whose life history is geared to the migrations of its hosts.

Royal Portora is one of Ulster’s famous schools.  Founded originally on a different site by a Charter from James 1 at the start of the 17th century, but the present building dates from the latter end of the 18th century.  On the distinguished old boy’s board can be seen distinguished names like H.F.Lyte, author of that world-famed hymn ‘Abide with me’, Father John Sullivan recently beatified by the Catholic church and that controversial figure even to this day ..the great Oscar Wilde who probably developed his ability for sarcastic comments whilst walking in its lovely grounds.

Portora translated from the Irish means ‘the landing place of tears’. For it was from here that the dead were embarked on their last journey for burial to the holy island of Devenish.

Devenish lies like a great supernatural green curve on the water surrounded by reeds and it looks as if St.Molaise [one of Ireland’s 12 apostles and a contemporary of St. Columba] had built it yesterday instead of over 1,300 years ago.  So that he might give the island its proper baptism, he travelled the long and arduous path to Rome so that he could bring back a box of soil from the Coliseum in order that the martyred blood of our early Christian fathers might mingle with the soft wet soil.

A great curiosity on the island is the Devenish stone coffin, found inside the ruin tight against the first wall.

The stone coffin is of great age and is credited with possessing extraordinary curative powers and probably dates back to the 6th century and it is reputed to be the last resting place of the Saint himself.  The large stone is hallowed in the shape of a man, but they tell me that there is no man living could fit into it. Several have tried because it is believed that anyone who could force his body into it would immediately be relieved from any corporal malady under which he might labour. It fits man in length but the room for the shoulders is far too narrow.

Locals’ Tale on the Stone Coffin

Local people will tell you good fortune will come to the person who can lie in the coffin especially on the feast day of St. Molaisse 12th September and turn over three times, then the wish you expressed is sure to be granted.   But there’s a sting to this popular legend. If after lying in the coffin and having turned around for the third time and you feel comfortable in it, then beware of the curse of the coffin. You will die before the day ends but you are assured to go straight to heaven!

Believe it or not, there is good reason to believe that the coffin is actually that of the prophet Jeremiah.  In 11 King’s Ch.25 V.7, we read that Zebeklah, the last King of Judah, was blinded and his sons killed in about 588 B.C.

Historical research indicates that Jerimiah, with the help of his scribe, Baruch, rescued the two daughters of the King. He took the Stone of Destiny and the girls to Egypt, thence to Spain and eventually to Ulster.  Tea Tephi [her sister had died on the way] was there married to a royal prince named Eochaid.

About A.D.503, their descendant  Feargus Nhor was crowned King of Argle on the Stone [having crossed over to Scotland] and from him the present  Royal Family is descended.  So that the Queen is an actual descended of David, fulfilling God’s promise to him that his throne should endure forever.

Adjacent is ‘Teampall Mór’ or the ‘Big Church’ however nothing remains except a small window. And the stump of a wall with Celtic carvings on it.

In the year 836, the marauding Danes paid a destructive visit to Devenish laying waste the religious settlement.

Today, all that is left to that golden age in church history is a perfect round tower. Presently standing guard over the peaceful island as it has done for the last 1,000 years.

Rising to a height of 81 feet to its conical apex, one of the best-preserved in the whole of Ireland.

You will note the tower has a human head sculptured at each of the Cardinal points.  Round towers were used primarily as belfries and secondly as storehouses in which the church plate and other valuables were deposited in time of danger.  These high round towers offered security to this monastic settlement in the days of the Viking invasion.

The watcher at the highest slit window gave warning by ringing a handbell. The monks, seizing their treasurers like illuminated precious books, jewelled church plate and the sacred relics dashed for the tower.

“Here was placed the holy chalice that held the sacred wine.

And the gold cross from the altar, and the relic from the shrine,

And the mitre laghter, with its damonds from the East,

And the crozier of the pontiff, and the vestment oif the priest”

The Architect and St Mary’s Abbey

St. Gobhan Saer to whom tradition assigns the erection of a large number of Round Towers including the one at Devenish.  This great saint and architect, who is known in the ancient historical tales of the Irish as ‘Gobban the builder’  is said to have owed his great skill to St. Aidan, the companion of Molaise.

In the middle of the 15th century, the church returned again to its former request, for on the crown of the hill was built the fine mediaeval abbey of St. Mary’s, the abbey with its square bell tower can be seen for miles on Lough Erne. This is a fine ruin in all senses of the word, look out for the spiral staircase and a lovely decorated doorway with a carving of a bird pecking at leaves.

There are two graveyards on the island.  The principal families interred here are the Maguire’s [the ancient lords of this fair land], The McManus’s, and The O’Flanagans.

In the upper graveyard south of the abbey stands a remarkable stone high cross. Over 7 feet in height, and is quite unique among ancient monuments of its kind in Ireland. The crosshead is made up of 4-quarter circles lying back to back, the opposite from the old Celtic cross.

On one side can be seen the dim outline of our crucified Lord on the Cross. Whilst above the arms of the crucifix are two rose-shaped stone carvings of great beauty.

On its northern side is a shaven face reposing in the calm placidity of death. It is surrounded by a plaited band, like the border of a hood. These inner garments fastened at the breast with a broach. This death could well be that of an abbot and is most probably the resting place of a religious personage.

There is a very small but excellent museum on the island containing old sketches, photographs Celtic figures and carvings. All combined to remind us of the glory that once belonged to Ireland, ‘The Isle of Saints and Scholars’.

The lough shore natives believe a superstition that no year can pass without at least two drownings in the lake. For the nights prior, a banshee-like figure can be seen walking the water between the islands of Devenish and Innishmacsaint.